We’re blessed to be able to worship in a beautiful, inspiring building.  Despite being made with wooden scaffolds, rudimentary tools and makeshift mortar, it has stood for hundreds of years, and is likely to for hundreds more.  Most of us sucked in our breath and felt a sense of thrill when we first stepped inside it.  Many of us do even now.  Imagine what it must have been like for the mediaeval peasant folk who lived around it in timber dwellings?  Imagine the awe, the sense of glory and mystery – all pointing to the great God in whose name […]

‘Red and green should never be seen with nothing in-between.’  I don’t know if you’ve ever received that fashion advice – I don’t set much store by it myself, as my weekly emails attest: the more red and green, the better!  It comes from the idea that a strong contrast is off-putting: we like things to blend, to fit together… But as we conclude our week in the temple at Jerusalem, we must admit that at Jewish festival time, all of life is there.  Thousands will have gathered from all sections of society: near and far, rich and poor, and […]

In sports journalism nowadays the word GOAT has become one of the most likely you’ll see, especially online. Which might seem odd to you if you’re not a sports fan: what do goats have to do with professional sport?  The clue is in the capitals: GOAT is an acronym, which stands for Greatest Of All Time.  It allows sports fans endlessly to debate which of their heroes is the greatest – or, I should say, the Goat.  Are Messi or Ronaldo better than Pele, Maradona or Cruyff?  Is Lewis Hamilton now the Goat in the world of motorsport?  And so […]

It may surprise you to know, but even as late as Jesus’ lifetime the Jewish people were divided as to whether there was eternal life after death.  The early books of the Old Testament say little about it, and even some of our most cherished texts are ambiguous: the last verse of Psalm 23 actually says: ‘I will dwell in the house of the Lord for long days,’ which is shorthand for ‘the rest of my life’ – but Christian bible translators quickly started rendering it as ‘forever’.  That’s true, of course: we now believe it is forever – but it’s not […]

I didn’t plan it like this, but it’s somehow fitting that we are looking at today’s passage on the first day of the new tax year – and indeed on a day when a particular high profile tax rise in our country comes into effect.  It is, perhaps, cold comfort to know that controversy over paying taxes is as old as government itself.  In Jesus’ day, the issue was red-hot because such taxes were paid, not just to the people’s own leaders, but also to the Romans, their hated oppressors.  Those who collected them were considered traitors – which is […]

Deafness is a condition which runs in my family.  I am very thankful that thus far it has missed my generation: but I know firsthand how isolating it can be.  I do remember my nan, though, often giving my grandad a gentle telling off when he had ignored something his wife had clearly told him which he definitely didn’t want to do – ‘There’s none so deaf as those who will not hear,’ is what she would say. I’m sure many of you can relate to that!  Even if someone you love has great hearing, it’s amazing how often they […]

Questions, questions…. Some of you will know that before I was a vicar I worked for 12 years as a market researcher.  Many might consider that a good way to describe my old job would be as a ‘professional nuisance’!  However, if I was asked to describe my work, I would often answer that I was paid to ask questions. There’s an art to a good question – and without good questions, we couldn’t get the good answers our clients were paying lots of money for.  In today’s passage we fast forward a couple of chapters to the day after […]

Another day on this – is this an April Fool in itself?!  Thankfully not: I thought this brilliant passage was worth a second day.  And today it gets more personal.  Yesterday we looked at the power of a foolish message; today St Paul switches to a foolish audience.  After all, who else would respond to a foolish message? ‘Think of what you were when you were called.  Not many of you were wise… influential… of noble birth.  But God chose the foolish things of the world to shame the wise… the weak to shame the strong.’ The Christian message has […]

It somehow seems appropriate that, just before I started to write this, I watched a fierce snow blizzard tear through the trees outside my window, only to be replaced by benign sunshine a few moments later.  After a mostly warm and sunny March we’ve had scarcely believable weather on its last day! Today (as you read this) is April Fool’s Day, a noble tradition which dates back centuries, possibly even millennia.  Its origins are much disputed: the most plausible is that the day as we now know it began in 1582 when France switched from the Julian calendar to the […] 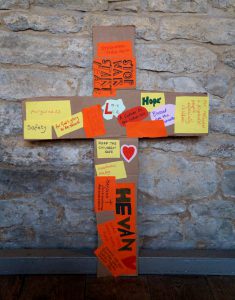